10 mistakes I’ve made so you won’t have to 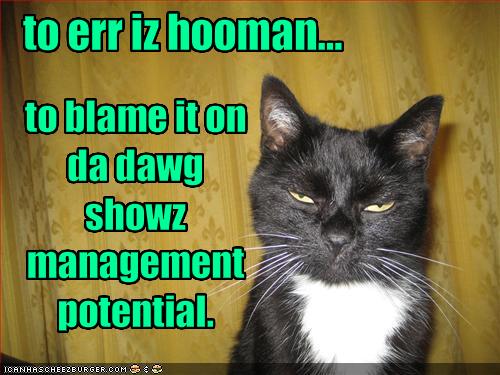 Here are 10 mistakes that I’ve made over the past 15 years that I thought I’d share. It’s in no particular order, though as I reflect on it there definitely seems to be a reverse timeline sort of thing happening, where the first part of the list refers more to the last five years and the rest of the list pokes at my mistakes earlier in my career.

Almost my entire “career”, I’ve been an entrepreneur. Started a company when I was in college. Did that for ten years. Sold it to Engauge in 2008 and after a while I kind of fell into the trap of thinking that I just had a job and that I was no longer an entrepreneur. I thought I wouldn’t be able to really effect change until I left and started something new. I was like the dolphin with the flopped over dorsal fin.

Then I woke up. Decided I was being a wuss, that I could still make change even though I wasn’t the one in complete control. I wrote this post about being an entrepreneur with a job. And since then I’ve had a completely different outlook.

#2 – I stopped pushing myself to be smart

It’s so easy to get lost in the day-to-day activities of your job and forget to keep reading, writing and pushing yourself to learn. I now try to consume, write and participate on a daily basis. Which leads me to my next mistake…

#3 – I waited far, far too long to start blogging

One of the best things I ever did was start this blog. For nothing else, it forces me to have an opinion and think. It’s also a great way to teach yourself self-discipline. No one is reminding me to blog. It’s all on me. But what’s happened is that through this blog I’ve met new people, debated with people on fun topics and generally forced myself to think about what is most important to me.

#4 – I’ve hired for experience rather than qualities

I no longer make this mistake, but I used to put a resume above all else when hiring people. So dumb. Instead I now prefer to get people that have what I call A+ qualities. I’ll hire a person with the right attitude and passion before someone with the perfect resume all day long.

Hopping up on my soapbox ~  I’ll never have my own office again ~ hopping back down.

Honestly, this post was getting long so I thought a funny photo about mistakes would help. Plus its a cat. Cat’s are hilarious, right?

For a good eight years of my career I was heads down trying to build my business. I did very little to help any non-profits or charitable groups personally. As a company we did some but I didn’t sit on any boards or get involved personally. It wasn’t until one of my mentors pointed this out to me that I started getting more involved. Now I’m involved with Junior Achievement of Georgia, The Children’s Museum of Atlanta and the Atlanta Zoo. All groups that work with kids – helping kids appeals to me, probably because I have so many 🙂 – and all areas where I can help from a digital perspective. It’s awesome to help and give back and I only wish I had done it sooner.

#7 – I took too long to get personal and business advisers

When I’m asked by young entrepreneurs for advice on how to be successful, the first thing I say is to build an advisory board. I think it was about five or six years in before I put my advisory board together. It was incredibly helpful as we tried to grow our business. But man could we have used them in those early years!

Even though after we sold Spunlogic we had to discontinue the advisory board, I’ve continued to have a couple of advisers that help me navigate my career. Having someone, especially someone with experience, care about you and give you advice is priceless.

#8 – I didn’t understand the value of public speaking

I wrote earlier this week about the benefits of public speaking, so I won’t belabor that point, but I waited far too long to start public speaking and it has helped me succeed in many ways. I only wish I had started sooner.

Looking back, I realize that early in my career I very much hid behind email at times when I should have picked up the phone, or walked down the hall, to talk to someone about an issue. I remember hiring someone once and one of his references told me that the only thing he really needed to work on was not using email as much to deal with issues. At that point I reflected on my email habit and realized it was something I did as well. It’s certainly not easier to pick up the phone but its almost always the best way to deal with a problem.

I still struggle with this at times, honestly, but today its less about the confrontation and more about convenience of email. The game of phone tag annoys me to no end so I rarely will call someone if we haven’t communicated about it first via email.

#10 – I forgot to celebrate the successes

This is one that I was really bad about as a young person. I’m 35 now, I can say “young person” right?

I was so doggedly focused on growing my company that I could see only the problems that needed to be fixed and the hurdles that were in front of me that we needed to overcome. We’d win a new piece of business and I would relax for a second, probably sigh as if it to say, “Great, now we’ll be able to make payroll for another two months,” then I’d put my head back down and focus back on the problems.

I’ve learned now that celebrating the successes is extremely important and if you don’t, then what’s the point of having them?

~ I got the idea for this post from Tara Hunt, who has a slideshare presentation of the same name. As I typically do, I didn’t watch her presentation because I wanted to see where I would land if I wrote a post on this subject. But all credit for the title goes to her 😉

How Steve Jobs pitches a startup

10 mistakes I’ve made so you won’t have to